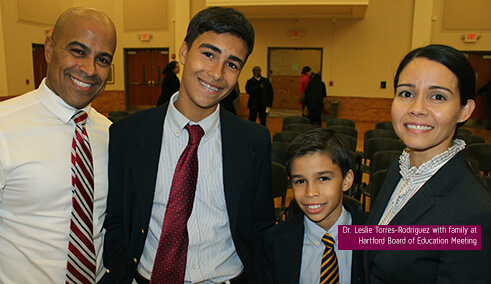 In fact, that is her own story, Dr. Torres-Rodriguez told the Board Tuesday evening, pledging to keep the District’s commitment to hold high expectations for – and work on behalf of – each and every student.  Having arrived in Hartford as a nine-year-old from Puerto Rico with barely a word of English, she told the Board after it unanimously confirmed her appointment, no one ever should let the “narrow narrative” of demography, of the disenfranchised, of students of color, or of English learners – define either the students being served … or her.

Because her story surpassed hardships, she said, she has gone on to lead learning and change.  “And here I am,” she said.

Her journey from poverty on Park Street took her from a social and behavioral sciences professorship at Capital Community College to school social worker and freshman academy director roles; then school principal-ships at the CREC Public Safety and Great Path Academies.  At the CT Center for School Change, she coordinated and facilitated a leadership development program for turnaround principals, before taking on an 11-school HPS network in January 2015 as one of Hartford’s assistant superintendents of instructional leadership.

Dr. Torres-Rodriguez earned a doctorate in educational leadership from Central CT State University in 2008, building on her UConn master’s in social work and bachelor’s degrees; a journey she attributes to a relentless and personal commitment to continuous learning, service, and excellence.

Her record prompted Board Chair Richard Wareing to advise that he knows no educator with greater courage and determination – or who is better organized – than Dr. Torres-Rodriguez.

At the same time, the Hartford Board faces the most challenging times since the State takeover of the District in the late 1990s, Chair Wareing reflected, citing the significant budget issues that loom for the District – and the even greater ones sitting on the City and State horizons.

Introducing Dr. Torres-Rodriguez, he predicted, she will do a lot more than just hold the fort while the District searches for a permanent superintendent.  Speaking at the 3:30 mark of this video, Chair Wareing offered unvarnished views of the District’s imminent challenges.

The full remarks from Dr. Torres-Rodriguez are inspiring (at the 6:30 mark of this video).