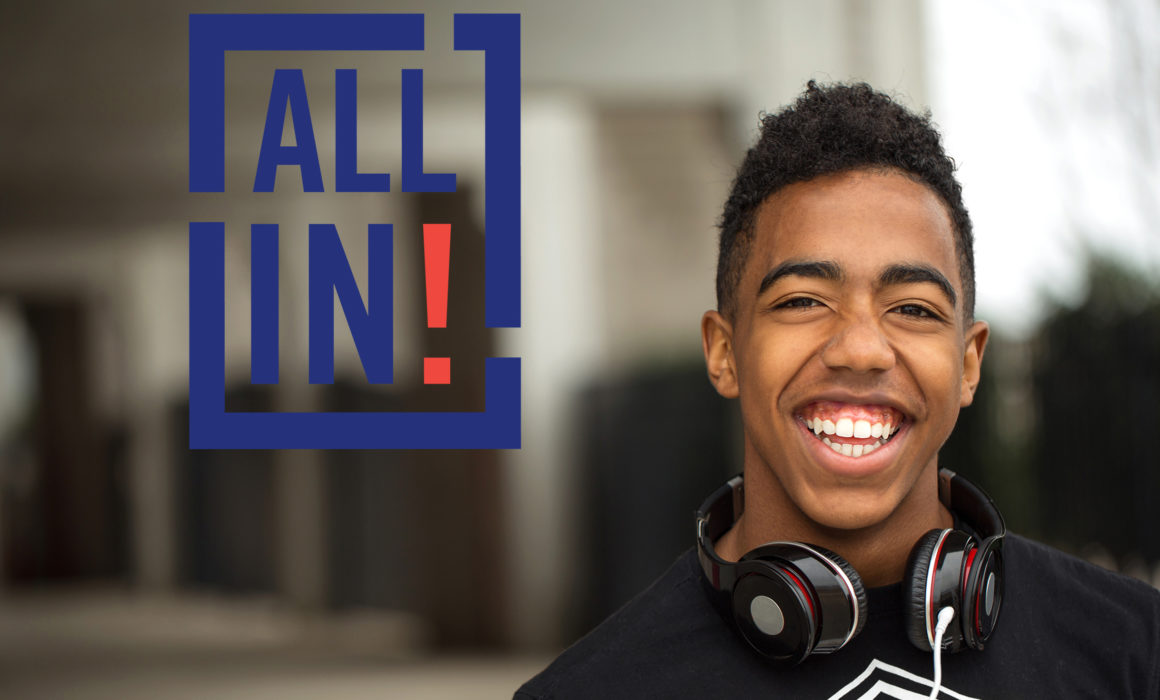 So, last winter, Hartford Promise teamed up with the Connecticut Bar Association and the ALL IN! Coalition to identify kids who are on the cusp of eligibility as “Nearlies” and to establish the “Nearlies” action team. In the half-year pilot program, Hartford schools identified 32 juniors and seniors from three high schools who nearly qualified but fell slightly below the Hartford Promise cut off. As Hartford Promise scholars, Hartford residents who earn at least a 3.0 GPA and have at least a 93 percent cumulative attendance record receive up to $20,000 over four years if they attend an accredited, non-profit college or university.

To help move more students into eligibility, the “Nearlies” students were offered the option of working with a mentor who would help them improve their grades and attendance. After learning about what mentoring would entail, 30 students agreed to participate.

Many of these students hold jobs, care for younger siblings and face obstacles their suburban peers can’t even imagine. Most are the first in their families to attend college.

Tajh Hamilton, a senior at Pathways Academy of Technology & Design, says he was already a hard worker who cared about his grades, but his mentor provided him valuable feedback on papers. He appreciated her encouragement, especially when he started losing steam toward the end of the school year, he says.

His mentor, Denise V. Zamore, “told me to keep striving,” says Tajh, who is one of 10 children. His parents can’t help him with his schoolwork, he says.  “I have a hard time with English. She served as my editor.”

Zamore, senior associate general council with United Healthcare, says she’s happy to “pay it forward” and mentor a Hartford student, since mentors were crucial to her success.

At the end of last year, after Tajh told her he had missed a deadline handing in a paper, Zamore chided him and suggested that he finish the work and send it to her that night for feedback. That night, they worked on it virtually and he submitted it the next day, only a day late.

Even seniors who didn’t become Hartford Promise Scholars gained from the experience of working with a mentor, Sugarman says. One senior works nearly 40 hours a week at a retail store, where he is valued and has become a supervisor. His work schedule hurt his school attendance, but he gained so much confidence from his job that his mentor didn’t want to discourage him from working, Sugarman says. The student formed a strong bond with his mentor and they could talk openly, he says. The mentor invited his mentee to shadow him at work, visited the student’s family and workplace and attended the student’s graduation.

“He’s going to college and he’s going to be great,” Sugarman says. “It’s not that when they miss they’re losers. What they do have is these additional relationships with a caring adult.”

In the pilot program, 15 mentors were screened, trained and given a mentor playbook with guidelines and suggestions. Most mentors met every other week with two mentees and stayed in touch with them between meetings through phone calls, texts and emails. Mentees signed a contract agreeing to work with a mentor and allow their mentor to access their grades and attendance records.

“The contact had to be regular, dependable and frequent, so they could establish a relationship of trust and comfort, with a focus on grades and attendance,” Sugarman says. Several mentors invited their mentees to observe them at their jobs and took them to see the film, Black Panther.

With mentors’ ability to communicate with mentees’ teachers and guidance counselors, action team members hoped that problems could be addressed before report cards came out. Mentors tried to help mentees strategize back-up plans if life events interfered with their ability to study and attend school.

Mid-way through the program, mentors participated in a review to discuss challenges and triumphs and compare notes on obstacles and opportunities for improvement.

Mentors’ didn’t see students’ grades until after report cards came out, so action team members are working with school officials to ensure that mentors see to the most up-to-date student records, says Kyle Smith, associate director of admission at Trinity College and an action team member.

Zamore says she plans to meet with Tajh and his guidance counselor this month to discuss communication and college plans. This year, with access to students’ grades as they’re posted, she says, she’ll be able to provide targeted guidance to help Tajh get his GPA to 3.0 or better.

The first year fell short of its goal of getting at least 50 percent of “Nearlies” over the line to qualify as Promise Scholars, but it was a learning process.

“We were inventing and creating as the program was going on,” Smith says. “Now we have the opportunity to start at the beginning of the school year, taking advantage of hindsight.”

Some mentors and mentees said they would have preferred to work one-on-one, so organizers plan to expand the pool of mentors. They’d also like to build a college visit into the program and offer a workshop for students and their mentors on financial aid.

The ALL IN! Coalition provided seed funding and recruited cross-sector leaders to support the “Nearlies” launch, including Teach for America, the Governor’s Prevention Partnership and the City of Hartford’s Community Engagement Office.  The “Nearlies” Action Team is now a full-fledged program of the Hartford Promise, run by its staff, and is expected to begin in October and expand from three to four high schools this year. While the Connecticut Bar Association and Trinity College provided the 15 mentors in the pilot phase, other professional organizations such as actuaries, public health workers and employees of Travelers and The Hartford have volunteered to deliver mentors from their ranks. Local education students from surrounding universities may also become mentors this year.

With the addition of about 25 “Nearlies” from Hartford Public High School in what will be the program’s first full year, Sugarman is optimistic.

“There are many really talented kids who are focused, disciplined, resilient and brilliant. Our scholarship, generally, is one of the few scholarships that are available to refugees and undocumented students,” says Sugarman. “If we’re able to go forward and be successful at getting hundreds of Hartford students to be successful in college, the impact on our community is transformative. Our workforce needs talented kids from diverse backgrounds.”

Zamore says she brought her 9-year-old son, Alex, to Black Eyed Sally’s with Tajh, because she sees her mentee as a role model for her son, telling Alex, “This is what a good young man acts like.”

Despite a time commitment of less than 10 hours a month, she says, she gains as much from the relationship as she gives.

The mentees appreciate that “somebody is invested in me, just for me,” says Zamore, who helped organize the mentorship program in her director role on the Connecticut Bar Foundation’s board.  Mentors of all races are welcome. “They don’t care if you’re purple. What resonates with them is an educated professional adult wants to spend time with them and wants them to succeed.” To learn more or volunteer as a mentor, contact Hartford Promise at 860-956-5310 or [email protected]