Per the Connecticut State Department of Education (CSDE)1: “Connecticut’s Next Generation Accountability System is a broad set of 12 indicators that help tell the story of how well a school is preparing its students for success in college, careers and life. The system moves beyond test scores and graduation rates and instead provides a more holistic, multifactor perspective of district and school performance and incorporates student growth over time. It was developed through extensive consultation with district and school leaders, Connecticut educators, state and national experts, CSDE staff, and many others. The system was conceived and developed under ESEA Flexibility and approved by the U.S. Department of Education (USED) on August 6, 2015. It was later included as part of Connecticut’s state plan under the Every Student Succeeds Act (ESSA).”

The “Performance Index” scores are whole numbers for some indicators, and percentages for others. For the sake of consistency, we instead use the “percentage of points earned” for each indicator. This is also how the state determines the final overall index score.

The table below contains the last three years of results for Hartford under the Next Generation Accountability System, and those results are mixed.

First, SBAC test scores are going down. Despite an upward bump in 2015-16, Hartford is earning similar or fewer points under this model for each of these measures (Indicators 1a-1f) as compared to 2014-15. The situation is even worse when considering the state’s SBAC Growth Model (Indicators 2a-2d), a measure of student improvement year-over-year; the losses on these indicators are responsible for the largest drops in percentage of points earned for Hartford Public Schools. That said, the Growth Model was not in place in 2014-15, so those indicators are blank for the first year in the table below. We therefore recommend a corresponding level of caution in interpreting the trends (or lack thereof) for those indicators.

On the other hand, the percentage of points earned by the Hartford Public Schools has increased (or stayed level) since 2014-15 on all of the other measures (Indicators 4a-12). For most of those measures, that means the rates have gone up, but note that in the case of Indicators 4a-4b, this means the rate of chronic absenteeism has gone down.

Overall, we see a downward trend in Hartford’s final Accountability Index score. Provisionally, one might conclude that Hartford appears to be making inroads on the indicators which apply to Grades 9-12, while falling behind on those which apply to Grades 3-8. If this is the case, any short-term progress being made at the high schools will be outweighed in the long run as those younger cohorts make their way through the system. 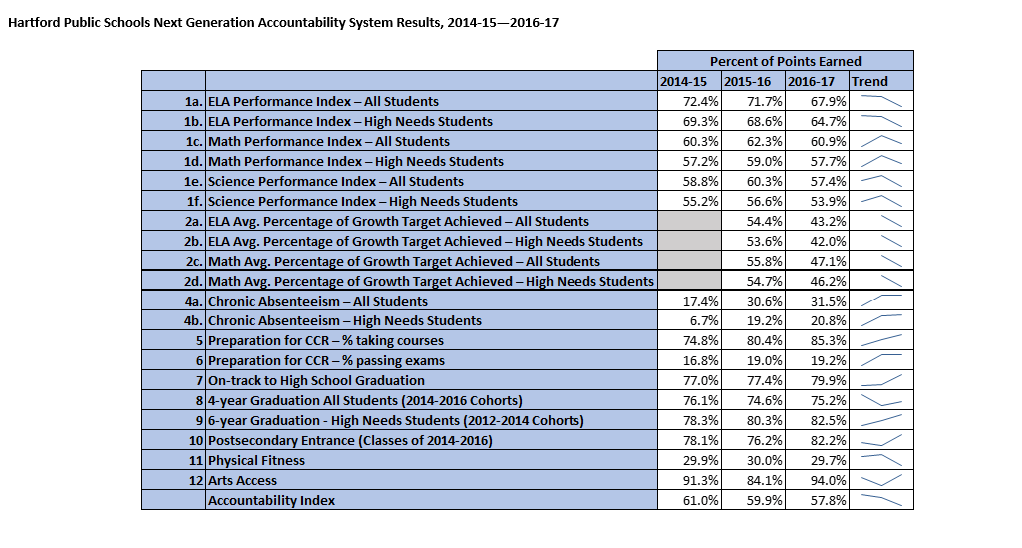