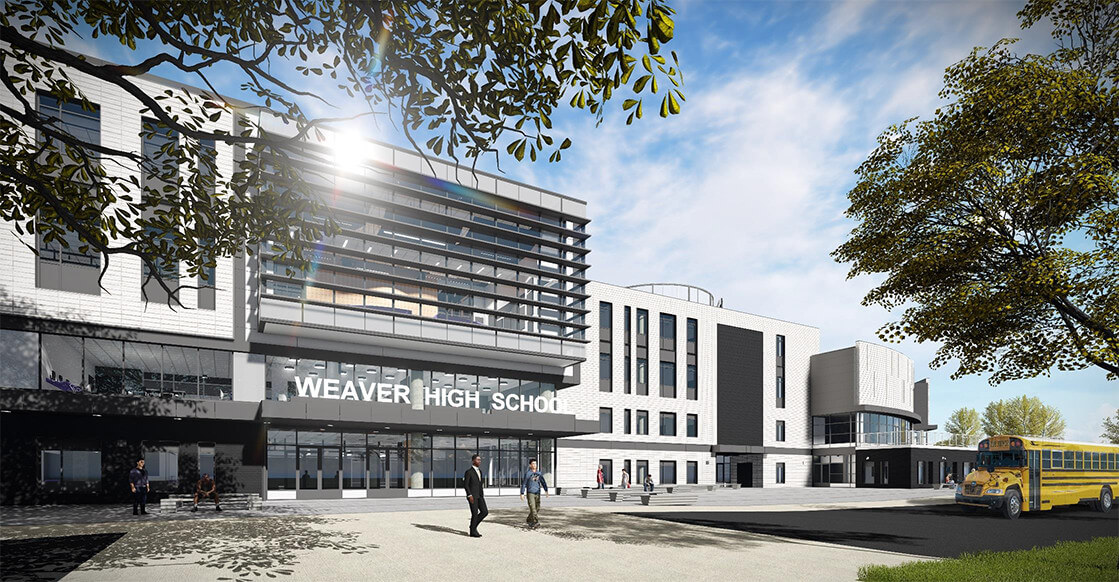 On the surface nothing in particular stands out for those arriving at a recent meeting in the atrium of Journalism & Media Academy. Walking into the building, one would have found a typical meeting space—rows of chairs and tables assembled in circles.

The 20-people assembled on this cold December evening are taking part in a process most never get to experience—designing a high school—and not just any school, but Weaver High School, one of Hartford’s great institutions.  Although a visit to the current Weaver school resembles a demolition zone, the Weaver Steering Committee sees something much greater in the piles of rubble. With the ability to look at the school with fresh eyes, they know the Weaver project is about much more than constructing a building.

“Even back in the day, with school turn arounds either forced via threat of state takeover or incentivized via federal Race-to-the-Top money, you still didn’t see the kind of community engagement that you’re seeing right now,” says Paul Diego Holzer, executive director of Achieve Hartford!. “There’s power in the school district, the private sector, and the grassroots community coming together without a mandate by the state and without a huge carrot from the federal government to imagine something new.”

It all started two years ago when the Blue Hills Civic Association led a series of community meetings and visioning sessions to define what kind of graduate the new Weaver High School must produce.  After that, volunteers broke into working groups to make recommendations on family and community engagement, school culture and climate, the student learning experience and the building design.

Then, when community leaders approached former school superintendent Dr. Beth Schiavino-Narvaez to co-lead the redesign process, she responded favorably. She knew she would have to engage with the community at some point, and here was Blue Hills Civic Association and residents already taking responsibility.

The $100,000 million fully renovated school is intended to open in 2019 and house 900 students from three schools being brought together under one roof – the Journalism and Media Academy, High School Inc., and Kinsella Magnet High School of Performing Arts.

This process doesn’t feel like the window dressing exercise of the past. “There is a very, very different feel this time around with both the community members and the private sector feeling like they can have their voice heard and can influence decisions at the highest level,” he says. “With so many educators, advocates and community leaders realizing that education issues can’t be solved without the community and without coming together, sharing power is the goal in this process. And it is a sign of strength for our city. Education leaders at Hartford Public Schools probably feel a sense of risk, but courageous leadership is what is called for right now.”

Despite looking like a prison because of its lack of windows, Weaver High School had at one time a reputation for providing a rigorous curriculum and graduating students well-prepared for the demands of high quality colleges. The school had relationships with area colleges and universities where students could enroll in educational summer programs that gave them a taste of medicine, engineering and other disciplines.

But in recent years, students with “A” averages at Weaver found themselves unprepared for college, often forced to begin with remedial classes, says Vicki Gallon-Clark, deputy director of the Blue Hills Civic Association and Weaver steering committee co-chair.

The long-time school volunteer says she agreed to co-lead the committee because she wanted to save future Weaver students from attending a school with a curriculum that lacks rigor, with teachers who don’t look like them.

“It’s a whole new story now,” she says. “We expect a rigorous academic curriculum. We want a voice in how that looks. There’s been some growing pains on both sides. There’s been some resistance. Conflict is good; it means the old norms are being challenged. It’s making room for creative ideas.”

The community members feel that their voice is being heard. For example, community representatives told the district representatives they want Weaver to have one leader, she says, bringing documentation to back up their recommendation.

Members of the Student Learning Experience work group have discussed details about the vetting and hiring of teachers, characteristics they want to see in the school leader and what core classes should be required for students, says Jason Farquharson, a BHCA board member, Weaver alumnus and steering committee member.

“Some people may say it’s been almost a year and we’re just getting into it,” but these things take time, says Karraine, who serves on the School Culture and Climate work group.  “So many people have different experiences with how they relate to the school.”

She’s appreciated the strong, in-depth, detailed conversations about testing, rigor and standards, she says, and feels people representing different perspectives have the chance to be heard. Each work group has been charged with establishing at least two or three measurable goals and recommendations within the next two months.

Another work group member, Kyra Brown, founder of Keys to the Gate, LLC, says as a parent and an active volunteer in the schools, she wanted to make sure the school would provide students with opportunities and prepare them for life after high school.

“We’re all working together,” she says. “We’re doing great work.”

So far, there are no high school students on the committee, but Ms. Vicki hopes they’ll be able to fill that gap and get at least one student on each of the work groups.

This story is the first in a series bringing you many of the innovative ways community members, educators, parents, students, higher education and business leaders are rethinking ways to do high school.