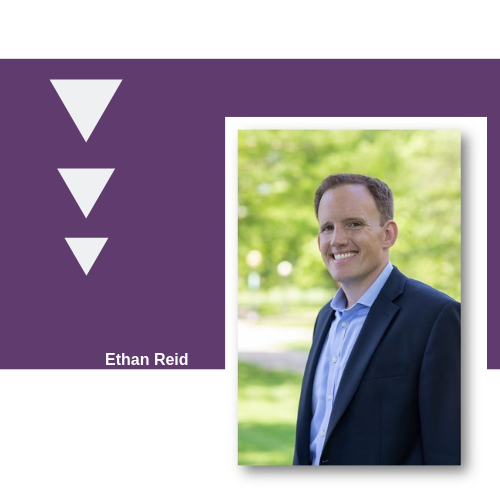 Ethan O. Reid graduated from Hartford Public High School and knows what a difference the teachers who believed in him made in his life. Even when he graduated in 1995, he says, he felt frustrated by what he perceived as the city’s failure to prioritize education for every student.

Decades later, walking from his car to his office at CityPlace, Reid walked by High School, Inc. and observed the enthusiasm its principal had for the students and the insurance and finance academy.

“He was a breath of fresh air. I thought what he was doing with a focus toward finance was really cool. I was interested in getting involved,” says Reid, who works at a financial services company here in Hartford.

When the certified financial planner learned a new Weaver High School was being built that would house High School, Inc., he didn’t hesitate to get involved in the planning process. He brought his perspective as a product of the Hartford schools, along with a desire to improve them.

He’s passionate about today’s students and wants to see that they get the quality education they need so they can flourish, he says.

He wants to help the Hartford schools do better.

“I was lucky in the Hartford schools. I had really good teachers. I felt like the teachers cared,” Reid said. In addition to strong support at home, he says, athletics played an important role in his development. He’s concerned that opportunities for school athletics are waning.

As a member of High School, Inc.’s industry advisory board, Reid brought his passion and perspective to Weaver’s Culture and Climate Work Group. He and the others on the work group were laser-focused on creating a unified school.

How does a finance guy contribute?

“Questioning the status quo is something that I’ve always been pretty comfortable with,” he says. For example, those involved in designing the new Weaver have talked about how to shift the limited resources to improve the school experience for students.

“We’re seeing a different way of thinking about how the school could be – what could come out of a new high school.”

It’s not too late to get involved. The new Weaver High is set to open in August 2019.  “We need a whole army of people to make sure it plays out right. What about the next five years? We want to make sure that it’s still a blue-ribbon school,” he says. If you’re someone who looks at the state of the Hartford schools and it angers you, he says, you’d be “a wonderful volunteer.”

“Everyone has skills whether they know it or not that they could bring to a group. If you have a passion, you’ll find your place in a work group based on your skills,” he says. “If you believe that all kids deserve a shot at a good education, if you have some time to volunteer and help out and add one little thing to some of these kids’ lives, then you should do it. You should join.”